What To Drink Now 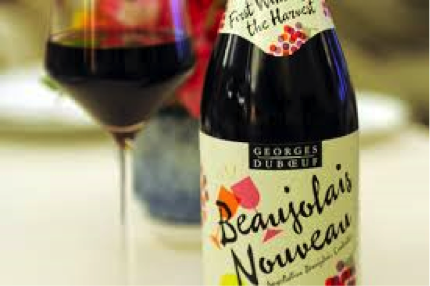 About to appear prominently in wine shops across America is the annual allotment of a wine called Beaujolais Nouveau. Retailing for $8 – $12 per bottle, these wines are released annually on the 3rd Thursday of November – national Beaujolais Nouveau Day in France.

This wine is exactly as it says on the label – Nouveau, or ‘new’. It is made from the current year’s harvest. Fermented quickly and not aged, it is bottled and released within 6 weeks of picking. This is the closest you will come to drinking wine right out of the fermentation tank!

The wine must be made of 100% Gamay grapes handpicked in the Beaujolais growing area of France. It is very light bodied, fresh, fruity and non tannic. Not made to age, it should be consumed within 6 months of release. After that time it will begin to lose fruit flavors and taste a bit like vinegar.

Production and consumption of this wine began in the 1950’s with a festival held among the producers to celebrate the end of the harvest season. The season’s wine was tested to predict the quality of the vintage for the ageable wines of Beaujolais.

The idea of a race to Paris carrying the first bottles of the new vintage was conceived and this attracted much media attention. By the 1970s, the race became a national event. The races spread to neighboring countries in Europe in the 1980s, followed by North America, and in the 1990s, to Asia.

Selling this young red was viewed by some vintners as a means to clear large quantities of wine at decent profits, which would create a much-needed cash flow shortly after harvest.

By coincidence, the release date of Beaujolais Nouveau is just the right date to ship to America as a ‘Thanksgiving wine’. It’s light, fruity taste is a good match with roasted turkey and the price is right.

Although it is not a representative of most of the high quality wines of France (even those from Beaujolais), it is often a good choice for your Thanksgiving ‘feast’. Give it a slight chill (about 20 minutes before opening) and drink it up now. It is also a good idea to purchase a Beaujolais Nouveau made by one of the more prominent producers – Georges Duboeuf, Domaine Yvon Metras, Jean-Paul Thevenet, and Louis Jadot.